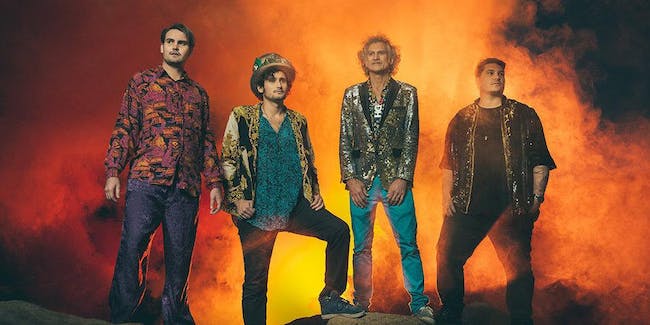 Over the past five years, the Desert Hearts Family has found itself at the center of a dusty movement, fostering intimate experiences of sonic joy and unbounded love across the globe. Part boutique festival, part record label, and part globetrotting party brigade, this ragtag crew of dreamers has emerged as a vibe-focused force radiating a conscious ethos of House, Techno and Love.

In November 2012, Desert Hearts began as a 200-person renegade gathering deep in the Mojave Desert, dreamt up by the DH’s founding quintet of Mikey Lion, Lee Reynolds, Porkchop, Marbs, & Kristoff McKay. The intrepid crew barely survived a set of extreme weather conditions and unfortunate circumstances, but that first party sparked a fire.

In just a few short years what began as a nomadic gathering of friends, has evolved into the darling of the West Coast house and techno scene. Though each edition of the festival may sell out, the DH Crew made the decision to keep the events intimate, ensuring that the love, radical self-expression and positive energy of that first adventure remains at its beating heart. It’s what has attracted world-class bookings like Tiefschwarz, DJ Harvey, Monkey Safari, Rodriguez Jr., DJ T, Claude VonStroke, Marc Houle, Olivier Giacomotto, Mark Henning, M.A.N.D.Y, and many more.

2014 saw the launch of Desert Hearts Records, a totally-free record label embodying the musical sensibility of the movement, while providing a platform to foster established and emerging talent from around the world. Entirely curated by Mikey Lion with Marbs handling the artwork for the label, past releases have included Andreas Henneberg, Latmun, The Glitz, jozif, TÅCHES, Dance Spirit, Fritz Carlton, Kevin Anderson, RYBO, and of course records from the core Desert Hearts Crew.

The beating heart of Desert Hearts is its founding fathers. A suitably colorful cast of characters, who fell into each other’s lives skating and surfing around the beaches of San Diego. Led by top hat sporting label boss Mikey Lion, the core crew is rounded out by ex-pro BMX legend turned DJ, Lee Reynolds, the artistic backbone of the crew, Marbs, Mikey’s younger brother & absolute madman, Porkchop, and renegade visionary Kristoff McKay.

If the Desert Hearts festival is the epicenter of this movement and the record label its voice, then the roaming City Hearts party series has become the legs that carry this evangelistic cause around the country. A roaming urban distillation of the festival, City Hearts has been sprinkling a little bit of California magic dust across the country and beyond, winning hearts and minds and selling out shows in Los Angeles, New York, Tulum, Mexico City, Miami, San Francisco, Houston, Chicago, Toronto, Denver, and more with more massive showings on the horizon.

Desert Hearts has given rise to a family of tens of thousands and it’s safe to say the Love Movement isn’t slowing down anytime soon. Everyone that attends our events is part of our family and who are what makes the tangibly delicious vibe so astronomically good. There is no Desert Hearts without the Family.