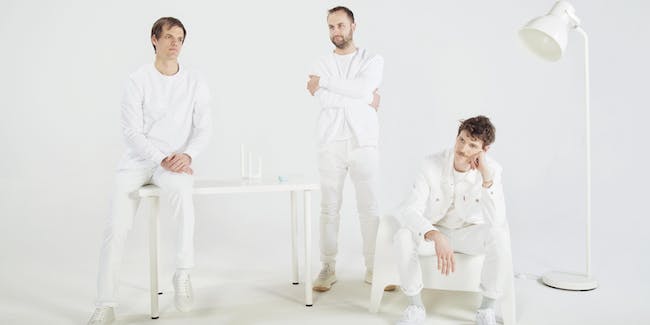 - Price is the same online, over the phone, or in the Box Office.

In late 2011, Matt Myers, Zak Appleby and Shane Cody started playing music together in a historic home in New Albany, Indiana dubbed "The Green House." Its rooms were adorned with relics from times past, so it was no surprise that songs such as “Penitentiary” bounced off the walls. Nostalgic sounds from their first album seemed to serve as a welcome escape for listeners from the relentless demands of the digital age. But if you asked any one of the guys, they were 'just having fun.'

Houndmouth signed with legendary indie label Rough Trade Records in 2012. From The Hills Below The City landed them on several world-famous platforms such as fellow lovable Hoosier, David Letterman's stage. When vocalist, guitarist, and songwriter Matt Myers first spoke with big-name producer Dave Cobb prior to working together on their sophomore LP Little Neon Limelight, the two laughingly agreed to “not make another fucking boring Americana record.” A natural sounding album captured in a familiar fashion came together, except this time with a #1 adult alternative radio single in “Sedona.” “I never once thought of us as an Americana band,” says drummer Shane Cody. “The four of us were just a rock band, but some of us had Southern accents,” he laughs.

The group find themselves on their third full length album, Golden Age, set for an August 3, 2018 release via Reprise Records, now with four new touring band members (Caleb Hickman, Drew Miller, Graeme Gardiner, and Aaron Craker - after Katie Toupin’s departure). Although there is no doubt that their perceived public identity is founded on roots and Americana, Houndmouth nevertheless created a concept album around a nostalgic future - and the sound will certainly reflect its message. The credits for Golden Age only begin to hint at the lengths they went to in order to find the sound of their nostalgic future — vintage Voxes, Vocoders and Moogs, modern programming, strings, tympani, baritone sax, live drums, Linn drums, unvarnished pianos and very distorted guitars. “What's happening with humans and technology right now was on my mind really heavily,” says Myers, “and we naturally went that way with the music too. Using synthesizers and drum pads just kind of felt right. I feel like we went into it being like, ‘Yeah, let’s do a Bruce Springsteen/Daft Punk record’.” Myers goes on to explain, “I think the human aspects are still paramount, even though it may sound a bit more bizarre. There's some part of Tom Petty, Randy Newman and the Band that I can’t get away from, and I wanted to keep that untouched, I guess. It’s not about trying to emulate what’s on the radio, it’s combining and messing with sounds to try to make something that seems very familiar but doesn't actually sound like anything you've ever heard before."

Houndmouth knew they wanted to work with producers who would be open to embracing a restless inventor’s spirit, but they had no idea just how inventive things would get until they hooked up with the team of Jonathan Rado, best known as a member of the celebrated indie band Foxygen, and Shawn Everett, who as a producer, engineer and mixer has been a primary collaborator on records from artists as diverse as Alabama Shakes, The Killers, The War on Drugs, Kesha, Kacey Musgraves and John Legend. In fact, the first single, “This Party,” bears a credit for “bucket and rubber band bass,” which turns out to be a literal rendering of just how they got the critical ingredient: by putting actual rubber bands around a bucket and pitching the plucking up or down in tone until they had the faux boomy bass-synth sound of everyone’s dreams. For another song, they cut up an analog tape loop and dragged it behind a truck in the desert outside of El Paso; when they ran it back through the machine, somehow the abuse had caused a spooky hi-hat sound to appear on the tape, which turned out to be just perfect for “World Leader.” As for the jaguars credited on “Black Jaguar”? They’re real — both the car and the animal. “There’s no denying that with the previous records, we weren't hip to all the stuff at our fingertips,” says bassist, vocalist, and songwriter Zak Appleby. “This time it was a completely different vibe — like, ‘Okay so we've got the skeleton for the song, now let's put the meat on it.’ I think experimental is exactly the right word. We still had boundaries to draw; they just didn’t have to do with how we got to the sounds. Shawn and Jonathan said, ‘Hey, any sound that you hear in your head — that you can hum, that you can imagine — we can create that here.’ That was day one, and that led the album in this awesome direction of anything being possible.”

On “Coast to Coast,” Myers sings, “Do you ever feel like a ghost when you’re staring into your phone?” Despite the holy-shit-far-outside-the-box recording style, the songs on this concept album touch more on the prison many humans find themselves in daily - one based around staring into the little electronic box we carry, or our “digital comfort zones” as the band describes them.

Knee-jerk reactions may define Golden Age as a metamorphosis, but it is in actuality a catharsis. Uploading one’s thoughts on life is easier than ever, but Houndmouth took a painstakingly unique route to creatively craft their purge of emotions. This album tackles the issues of identity and self in the digital epoch of romance.

Perhaps the perceived 'escape' or break in time provided by Houndmouth's initial sound was enough to fight off the modern plight for some time, but members and listeners are awarded now with true sight and perspective into the world as it currently stands. In the words of an author you probably quoted to some girl in college to sound interesting, "I think novels that leave out technology misrepresent life as badly as Victorians misrepresented life by leaving out sex," via Vonnegut.

Kyle Emerson, Denver’s buzzy indie-rocker, today releases “Better” from this upcoming new album Only Coming Down, due out this fall. At turns dreamy and driving, Emerson’s sophomore release bridges classic and contemporary sounds to create a warm, inviting, and introspective atmosphere. “Better,” was co-produced with Emerson's drummer Mark Anderson, who also took over engineering duties alongside James Barone (Beach House, Nathaniel Rateliff, Tennis). This summer, Emerson was a featured “303 Artist” on Indie 102.3, Denver’s new NPR music station and was recently named “Best of the Best” at the Underground Music Showcase in Denver by Ultra5280 Magazine. Stay tuned for tour dates to be announced soon.