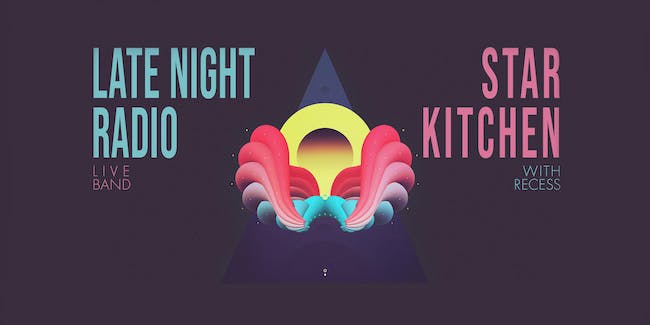 The story of Late Night Radio starts in what might seem to be the most unexpected of places: church.

Long before he cooked up his hypnotic hybrid of electronic music, hip-hop, soul, and funk, the artist born Alex Medellin spent countless hours watching mom sing two masses every week. Learning guitar and piano throughout his childhood, obsessing over everything from UGK and DJ Screw to The Doors and The Beatles, and internalizing those formative experiences, he capitalizes on that latent influence with his 2018 full-length debut, the appropriately titled Sunday [Thilos Records].

“I only recently realized it, but my favorite music is always hair-raising,” he exclaims. “I’m really into feel-good hip-hop, soul, and funk, and all of those styles are rooted in gospel progressions. As I’ve gotten older, that really had an effect on my music. For Sunday, the vision was to take bits and pieces of those genres and chop them up into something new. It was a natural step for me to pay homage to what I grew up on. You could call it ‘Sunday music’.”

It’s also a style he’s been working towards perfecting for nearly a decade. The Houston native bounced from New Orleans to Austin to Temecula and eventually Big Bear. During 2011, he started composing music for online videos and commercials before relocating to Colorado and seriously pursuing the art as a career, going full-time in 2014. Along the way, he released a series of fan favorite EPs—Concrete College [2012], Far Into the Night [2013], Soap Box [2014], and Reflective Tangents [2016]. The latter yielded “Find the Love” [feat. Borahm Lee], which clocked over 664K Spotify streams as the EP cumulatively tallied 2 million-plus. Emotionally charged and explosive live sets transformed Late Night Radio into a Denver sensation.

As the artist commenced work on Sunday, he broke the mold yet again. For the first time, the recording would be completely live, featuring his guitar playing and keys as well as live horn sections, trumpet, trombone, and saxophone. Additionally, it became his longest project at 11 tracks.

“The easiest way to describe my music is, ‘Electronic music for people who don’t really like electronic music’,” he continues. “There’s hip-hop bass and beats, which keep it relevant. However, I’m taking it into new territory.”

“That’s my modern take on a soul song,” he says. “It’s about empowerment and staying positive through today’s climate. It’s a bit of a statement for me.”

Meanwhile, the follow-up single “Overdue” segues from a steeple-size hum into a fingersnap-punctuated boom-bap beat that’s impossible to shake. In the end, the moniker Late Night Radio reflects the vibrant versatility at the heart of the sound.

“At 3AM, DJs will play whatever they want on the radio,” he leaves off. “That’s what I’m doing. It’s a very eclectic mix. It’s who I am.”

Star Kitchen burst onto the scene in the last year with breakout sets at Electric Forest, Jam Cruise, High Sierra Music Festival and the Peach Music Festival. They honed their sound through constant rehearsals and headlining shows at small clubs throughout the northeast. Utilizing classics and deep cuts from the last 50 years as a base, the musicians in Star Kitchen cook up improvised remixes pulling from their diverse but overlapping expertise in underground hip-hop, space funk, blues rock, psychedelic R&B and live electronic music. The band will be bringing their recipe to the south and midwest US early this fall. Over 25 other musicians have already been featured as celebrity chefs in the Star Kitchen, and this fall will feature familiar faces and new ones as the band teams up with the New Mastersounds, the Motet, Umphrey’s McGee, Galactic, Jennifer Hartswick & Nick Cassarino. Star Kitchen is Marc Brownstein, Marlon Lewis, Rob Marscher and Danny Mayer.