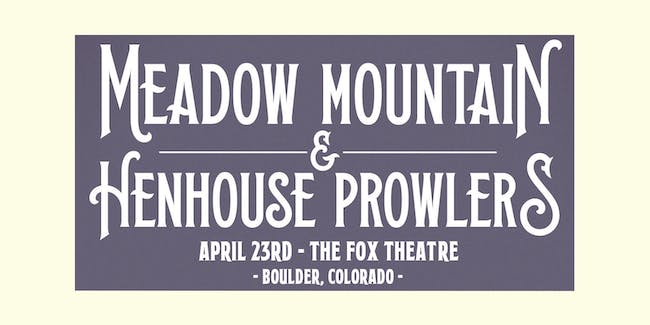 Meadow Mountain is breaking into the national Bluegrass scene this year. With appearances at the prestigious Freshgrass Band contest and official showcase slots at the International Bluegrass Music Association (IBMA) conference, it is surprising to some that only five years ago, three of the core members were learning their first fiddle tunes.

With a foundation of discipline and hard work, the members of Meadow Mountain set out at their formation to learn the traditional stylings of Bluegrass, which can be heard throughout their first record. They honed their skills over roughly 80 sets of music in one month aboard a cruise ship. They hosted Denver's only performance Bluegrass jam around a condenser mic, and in 2017, they won the prestigious Rockygrass band contest, which caught the ear of Infamous Stringduster Chris Pandolfi. He produced their debut record, which was released with regional and national press attention.

Sam Armstrong-Zickefoose joined Meadow Mountain as their banjo player in 2018. His progressive banjo playing aligned with the band's vision to produce music that pushed against genre barriers, and they quickly took off writing new songs. Fans who see the band in 2019 will hear a Meadow Mountain that is progressing rapidly. The songs that will end up on their sophomore record are instrumentally soaring, hard-driving songs that range in subject matter from early morning mountain climbing to progressive political ideals.

To make it easy, when asked what kind of music they play, Meadow Mountain will answer, "Bluegrass", but they are quick to add that it comes from Colorado, with love.

THE HENHOUSE PROWLERS ARE BLUEGRASS AMBASSADORS.

Founded over 14 years ago with the simple desire to play original and powerful bluegrass, this quartet now finds themselves at the intersection of performance, diplomacy and education.

The Prowlers have now been to more than 25 countries across the globe. Working with the U.S. State Department and under their own nonprofit, Bluegrass Ambassadors, the band incorporates music from Africa, Asia, the Middle East and more into their already robust repertoire of unique traditional American music.When performing live, presenting workshops and wherever they are, the Henhouse Prowlers find and spread the commonality we share as human beings through the universal language of music.You can feel it at every show.

On stage, the group's electrifying performances give audiences a sense of how much they love what they do; while on record, the band manages to explore their collective life experiences through songwriting and intricate instrumentation. While bluegrass is the undeniable foundation of the Prowlers music, the band manages to bend and squeeze the traditional form into a sound all their own.

With over 175 shows a year, the quartet often performs in places traditional American music has never been.

Tours in Siberia or the Middle East are not uncommon since the Prowlers started working as cultural ambassadors with the US State Department in 2013 on the American Music Abroad cultural diplomacy tours. These global experiences have pushed the band in new directions musically, with songs from Africa and Asia on several albums, but they have also moved the group to start an educational outreach program for school children and festival-goers alike. The Prowlers nonprofit, Bluegrass Ambassadors, uses traditional American music as an educational foundation to connect folk music and cultures all over the world. Having been to 11 countries in Africa alongside Russia, Pakistan, Kyrgyzstan, Saudi Arabia and UAE, these powerful direct experiences with distant peoples and musicians have shaped the band’s worldview and shifted the group’s direction towards bridging cultural gaps through music, educational programs and workshops.

The Henhouse Prowlers released two albums in 2017, including "Live from Kyrgyzstan" in March and the phenomenal studio album "Separation Man" in November. 2018-2019 sees more European tours for the band and even more adventures as the Prowlers continue to bring their own blend of bluegrass and world music to hearts unknown.