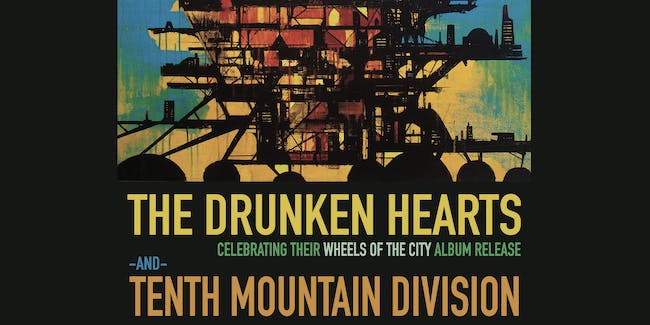 From their humble beginnings as an acoustic trio, The Drunken Hearts have evolved into an electric five-piece that is captivating audiences across the country. In those few years, the Colorado-based group has managed to make a name for itself in a state that is known for cultivating world-class music. The band fearlessly bottles a tempestuous, yet honest brand of Americana music — infusing spirited vocals with electric and acoustic instruments, and crafting heartfelt songs that are resonating with crowds everywhere.

Originally an outlet for lead singer and acoustic guitarist, Andrew McConathy, he knew in his heart the band must expand musically to satisfy a growing songbook of original material. It was this ideal that inspired a band capable of writing and performing songs that convey whispers of love and loss, while also delivering full-on rock anthems that chase down the American dream.

With this evolution, the band is releasing their most acclaimed album to date, The Prize, in March of 2018 — an album that fully realizes the unique yet familiar sound the five musicians evoke when they create and perform together night after night. The ten songs featured on The Prize seamlessly unite their poetic and thoughtful songwriting with impressive musicianship to bring each track alive. From the vulnerable and haunting, “Seasons,” to the rowdy honkytonk-inspired “Broken Things,” The Prize is a powerful statement to where The Drunken Hearts currently are, yet more importantly— where they are going.

Building on the release of The Prize, the band is touring the country from coast-to-coast, with stops at famed venues and festivals along the way. With notable performances at Electric Forest (MI), FloydFest (VA), Vertex (CO), Fayetteville Roots Fest (AR), Hangtown Music Festival (CA), Bohemian Nights at New West Fest (CO), Northwest String Summit (OR), and the band’s very own YarmonyGrass (CO), the band is very much at home on the festival circuit. Tyra Sutak of Elevation Outdoors Magazine described her experience as "Magnetic. It’s one of the only words my buddy and I could agree on to describe the feeling of the first time we caught Colorado-based band, The Drunken Hearts, live.”

"This bands ruminating respect for music of the past, and deep dedication towards the creative crafting of a new sound, sets Tenth Mountain Division apart in the Colorado music scene. Tenth Mountain Division speaks the language of Colorado, the language of the mountains.” (Noah Stein - CU Independent) Originating from Boulder, CO, founders Winston Heuga (Mandolin) and MJ Ouimette (Electric/Acoustic Guitar) originally sought to create an acoustic bluegrass outfit. After a few years dedicated to playing bluegrass, the duo transitioned to an electrified, rock’n’roll sound. Through out its preliminary years finding their roots in college and playing with an array of different line-ups, the band finally found their permanent line up in May of 2017 with the addition of bassist and vocalist Andrew Cooney. Drummer Tyler Gwynn and the ever-talented keyboard player Campbell Thomas form the quintet that creates a diverse soundscape combining soaring electric guitar leads and jabbing keys while retaining its roots in bluegrass with Heuga’s incomparable mandolin style. The rhythmic interplay of Cooney's driving bass fused with Gwynn’s incendiary drumming round out the unique sounding band that is truly a style of its own; what the band refers to as "Ski Rock". Tenth Mountain Division has evolved greatly since its inception but retains its roots in the American musical styles of rock, Americana, bluegrass, prog and the crossroads between them all. Since TMD’s first national tour upon earning a slot at the 2016 Summer Camp Music Festival with headlining acts like Tom Petty’s Mud Crutch, Moe, and Umphrey’s Mcgee, the band has embarked all across this country playing esteemed venues like Boulder's Fox Theater, Baton Rouge's Varsity Theatre, Austin's The Parish, Nashville's Acme Feed & Seed, Baltimore's 8X10, and many more; The band has played festivals including Summer Camp, Beanstalk, Head for the Hills, Pardee Palooza and after parties for the likes of Dead & Company, Twiddle, STS9, Moon Taxi, and Marcus King Band; and have had the honor of sharing the stage with artists including Nicki Bluhm, Jeff Coffin (Dave Matthews Band/ Bela Fleck), Bill Payne (Little Feet), Jeff Austin ( Yonder Mountain String Band), Jeremy Garret ( Infamous String Dusters), Andy Thorn and Alwyn Robinson (Leftover Salmon), Jon Stickley Trio, and contemporaries such as The Magic Beans and Spafford. This is only the beginning, stay tuned for all that’s to come!