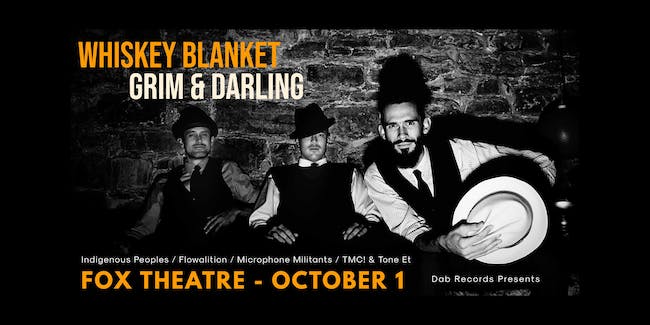 With the concern of general health safety, we apologize that we must cancel the DAB Records event with Whiskey Blanket, Grim&Darling, Jordan Polovina & More on October 1st, 2020 at the Fox Theatre. Refunds will be processed automatically at the point of purchase. Thank you for understanding.

Whiskey Blanket is perhaps the world's most unconventional hip-hop group. The multi-talented trio integrates live violin, cello, and turn-tablism into haunting beat-scapes, only to drop their instruments and double as emcees. Add in a drum machine, harmonica, keyboard, some slick three piece suites, and a decade of shared experience, and you've got a show that's not to be missed. Incorporating musical influence that spans from Brazil to Japan and everywhere in between, the group’s five independent studio releases have garnered world-wide attention while never neglecting the rich musical heritage of their own back yard. Listeners find themselves drawn to the Blanket's unique and refreshing sounds, often unable to categorize what they're hearing. Whiskey Blanket believes that laptops are better for coffee shops than for live performances, so they're dedicated to creating a music experience that's energetic, engaging, and most importantly just that – musical. Buy their recordings and catch them live to support real musicianship while it still exists.

While many attempt to think outside the box when it comes to music, few actually succeed at creating something wholly new and fresh. That is not the case for Denver-based duo Grim&Darling Jordan Polovina (Cello/Vocals/Beatbox/Harmonica) and Jessa Raskin (Lead vocals/Acoustic/Electric guitar) who have introduced what they describe as folk-hop to Colorado.

Jordan Polovina is a multifaceted cellist, producer, lyricist and beat boxer based in Denver. His performances incorporate the MPC Live, allowing for a seamless blend of vocals, on-the-fly beats, and live instrumentation. Other projects include Whiskey Blanket, Animated Earth, and Grim&Darling.